As an expert in mini vehicles, there are things that only Daihatsu can do

Daihatsu’s image is closely associated with mini vehicles, yet the company is perhaps less commonly thought of as a major player in overseas markets.
At present, the company is expanding its overseas business primarily in Indonesia and Malaysia. Daihatsu uses the technologies and expertise—for fuel efficiency and affordable pricing, for example—it has cultivated through its development of mini vehicles in Japan to develop, produce, and sell compact cars overseas.

Just as in Japan Daihatsu’s mini vehicles are widely used both at home and at work due to their economic performance and ease-of-driving, so overseas Daihatsu’s cars have become indispensable partners in the everyday lives of local customers.

Daihatsu intends to further refine its technologies for making small-size cars, and so contribute to expanding sales of the Toyota Group’s compact cars across the globe.

In order to minimize costs and operate its plants in an efficient manner, Daihatsu has developed the Simple, Slim, and Compact (SSC) concept to creating mini vehicles at its Japanese plants. Where appropriate, the company incorporates the same SSC concept in its production sites in Indonesia and Malaysia.

Daihatsu also invites employees from its overseas business sites to its Japanese plants, where they learn about Japanese approaches to manufacturing and about Japanese culture; these employees then return to their own countries, where they assume leadership roles. In this way, Daihatsu contributes to the training of local human resources.

Thanks to such initiatives, Daihatsu’s overseas plants are now capable of producing cars of an equal quality to those produced in Japan. 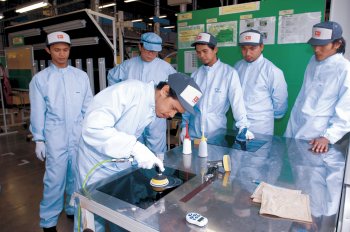 Aiming to be the best in every country

Daihatsu’s overseas expansion can be characterized in the following way: cars suited to local needs are built in local plants by local people.

Established in 1992, P.T. Astra Daihatsu Motor (ADM) operates an integrated business that ranges from production to sales. In 2003, ADM launched the Xenia—a car it had jointly developed with Toyota, and which was sold by Toyota as the Avanza—and so accelerated the process of motorization in Indonesia.

*including consigned/OEM cars for Toyota

In order to cater to increasing international competition, Perodua has implemented structural reforms, and commenced operations at a new body, engine, and transmission plant. In this way, the company is seeking to improve its competitiveness as quickly as possible.

Following its structural reforms, Perodua has launched the Axia, the Bezza, and the Aruz; these models are all highly regarded by local customers, and have helped the company retain its position as market leader for a 14th year in succession.

Looking at DAIHATSU by the Numbers