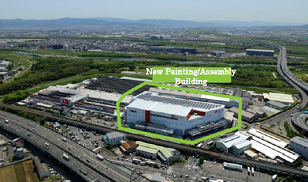 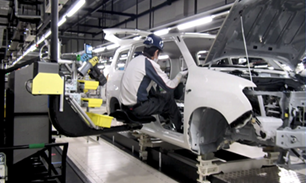 Daihatsu Motor Co., Ltd. (hereinafter “Daihatsu”) announced today that it has updated its Kyoto (Oyamazaki) Plant toward carbon neutrality. The plant advances the implementation of Simple, Slim and Compact (SSC) and has started full-scale operation as an environmentally- and people-friendly plant. Safety prayer and completion ceremonies were held today.

The Kyoto (Oyamazaki) Plant began operations in 1973. It has produced a cumulative total of approximately 6.4 million units, mainly compact cars and vehicles entrusted by Toyota Motor Corporation. In September 2018, the Kyoto (Oyamazaki) Plant began a major update for the first time in about 50 years to maintain and improve competitiveness, and to become a next-generation plant where CO2 emissions are reduced and a diverse workforce can work comfortably.

The new plant pursues Daihatsu's MONODUKURI concept of SSC and implements thorough energy-saving measures. The painting and assembly processes have been consolidated in one newly constructed building. In addition, improvements such as the expanded use of SPS*1, which allows multiple people to work on one vehicle, and the shortening of process lengths through the traverse feeding of vehicles have been implemented. As a result, the number of processes has been reduced by approximately 15% compared to the previous plant and the time required to produce one vehicle has been shortened by approximately 30%. In addition, CO2 emissions have been reduced by approximately 42% compared to the previous plant through the use of new technologies, such as air conditioning recycling in dry booths at the paint plant and the use of solar energy.

Furthermore, with the aging of plant employees, Daihatsu has focused on creating people-friendly processes where everyone can work safely and with peace of mind. In the assembly process, tasks that place a physical burden on employees have been eliminated, such as tightening work while walking alongside or getting into vehicles. In the painting process, the plant has evolved to become an easier working environment for a diverse workforce by reducing the burden on workers, such as by expanding the automatic coating application scope of robots.
In addition, logistics in the transportation of finished vehicles have been reformed with the belief that the timely delivery of high-quality vehicles to customers will improve competitiveness.

*1 Abbreviation for Set Parts Supply System, a system in which parts for one vehicle are pre-set and supplied to the worker

Daihatsu will deploy the technology and know-how cultivated in this project both in Japan and overseas. It will also work toward realizing carbon neutrality in its plants by 2035 by promoting thorough energy-saving through the pursuit of SSC, the development and incorporation of innovative technologies, and the utilization of renewable energy. In addition, Daihatsu will also strive to make its Kyoto (Oyamazaki) Plant and all other plants beloved by the local community.