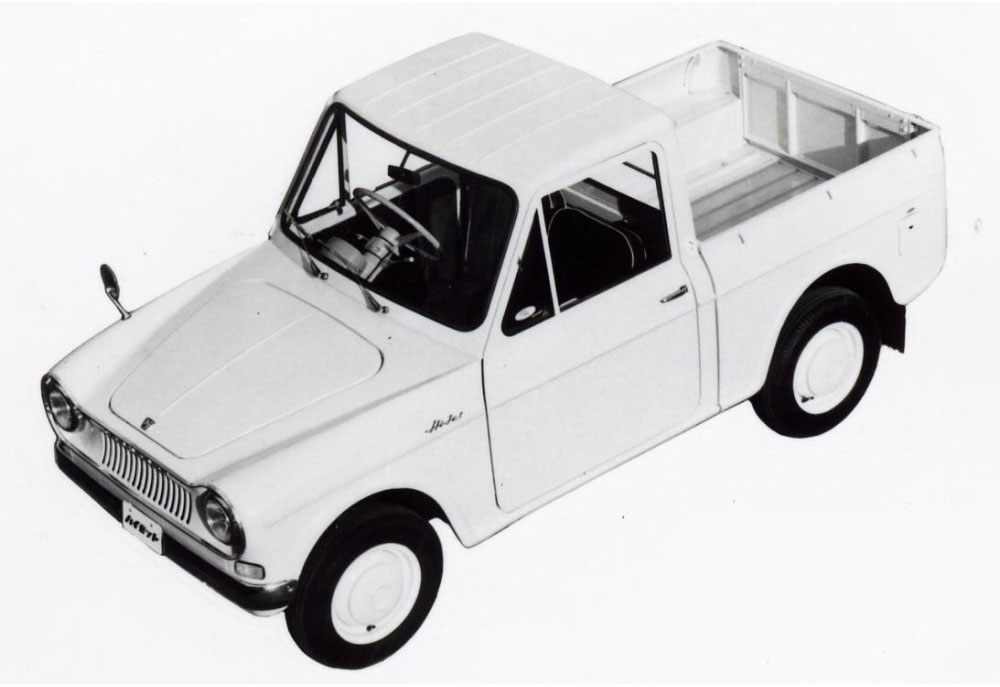 The first-generation Hijet launched in 1960 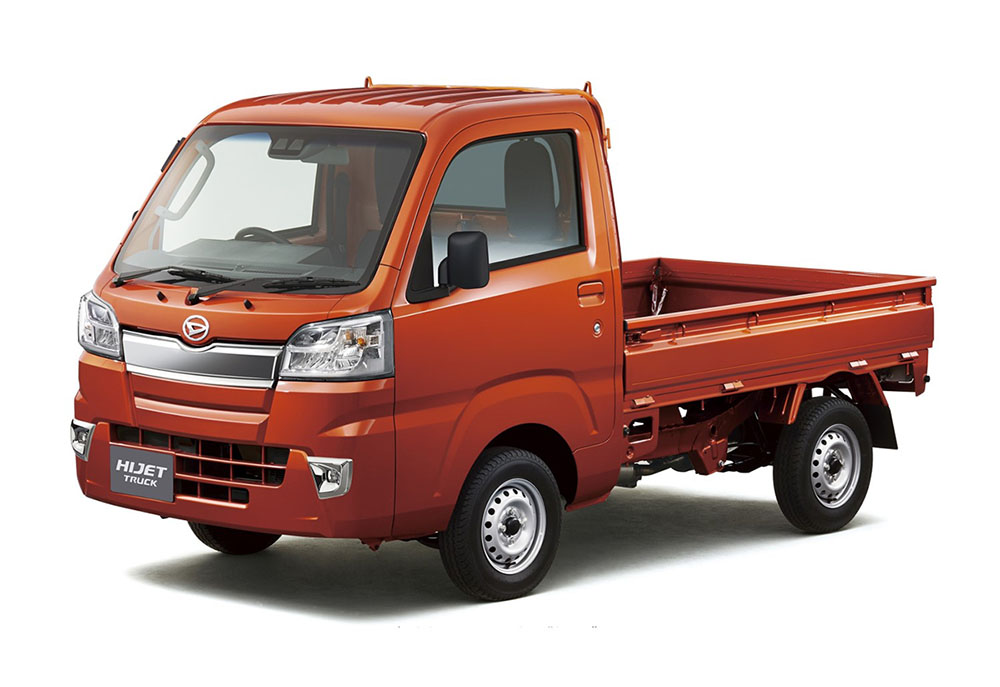 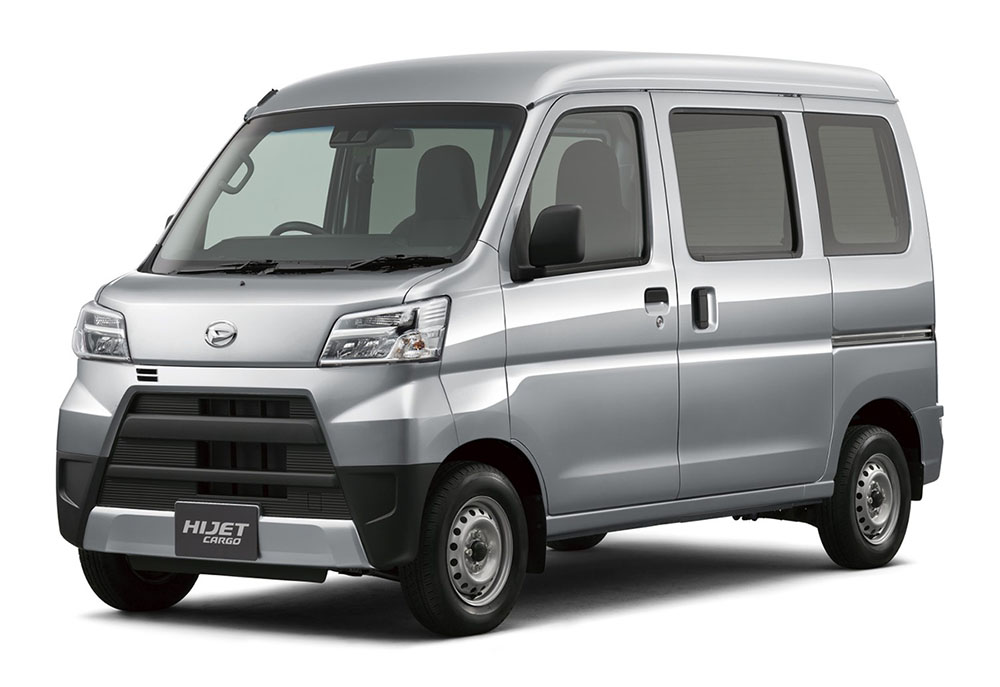 Daihatsu Motor Co., Ltd. (hereinafter “Daihatsu”) announced that its Hijet series of mini commercial vehicles celebrated its 60th anniversary in November 2020. The company wishes to express its gratitude to the customers who have supported the Hijet series over the past 60 years, and pledges to continue making cars that meet the demands of its customers’ lifestyles.

The first-generation Hijet was Daihatsu’s first-ever mini four-wheeled vehicle. It was released as a follow-up to the highly popular Midget mini three-wheeled vehicle and, with its greater loadability, was designed to be used in a variety of different jobs. Over the succeeding 60 years, the Hijet retained those features prioritized by mini commercial vehicle customers, namely a cabin that was easy to enter and exit, and a deck or luggage space with a high loading capacity. Daihatsu’s development of the Hijet also focused on a range of attributes vital to a vehicle designed for use on a daily basis: ease-of-loading and unloading cargo; durability; ease-of-maneuvering—enabling the vehicle to be driven on narrow roads such as paths running between rice fields and downtown alleys; and an affordable price. In addition, by offering a rich line-up of special-purpose vehicles, such as the Hijet Dump Truck series, the company ensured the Hijet series played a central role in its customers’ lives.

In recent years, there has been an increase in the number of customers using mini commercial vehicles in everyday scenarios—shopping, for example, commuting to work or school, and picking up and dropping off passengers—while the proportion of elderly users has also increased*2. To ensure that the Hijet series could be used in safety and with peace of mind in all manner of scenarios, it was equipped with the Smart Assist active safety system at the earliest opportunity. Designed to be a reliable partner for its users, the Hijet series has embodied the three core values of Daihatsu’s compact car development: high quality at affordable prices, mastering the smallest details, and providing advanced technologies to everyone.

Based on the Daihatsu Group slogan “Light you up”, that seeks to illuminate each and every one of its customers and provide them with an easy mobility life, going forward Daihatsu will continue to evolve the Hijet series.

*1 According to research carried out by Daihatsu, correct as of September 30, 2020. Cumulative production includes those sold under the Daihatsu brand only, and exclude units supplied on an OEM basis

*2 Source: “Report on survey of actual use of mini-vehicles,” issued by the Japan Automobile Manufacturers Association, Inc. in March 2020

(For details of all models in the Hijet series, please visit the Hijet 60th anniversary website［Japanese only］at the address given below) 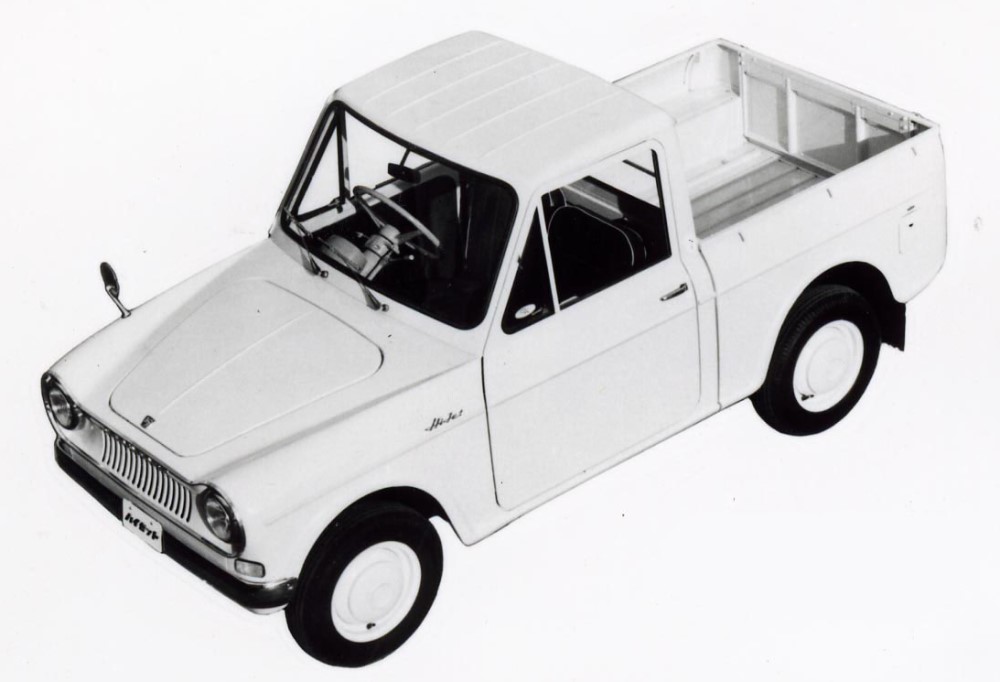 November 1960
Launched in the midst of Japan’s period of high economic growth, the first-generation 360cc Hijet was the successor to the highly popular Midget mini three-wheeled vehicle; it was also Daihatsu’s first-ever mini four-wheeled vehicle. With an innovative design that transformed the prevailing image of mini four-wheeled vehicles, the Hijet twinned superb loading capacity with outstanding comfort. In 1961, the company launched a hatchback-van model, and the Hijet series helped usher in an age of one car per family as a new family car that combined business and leisure. 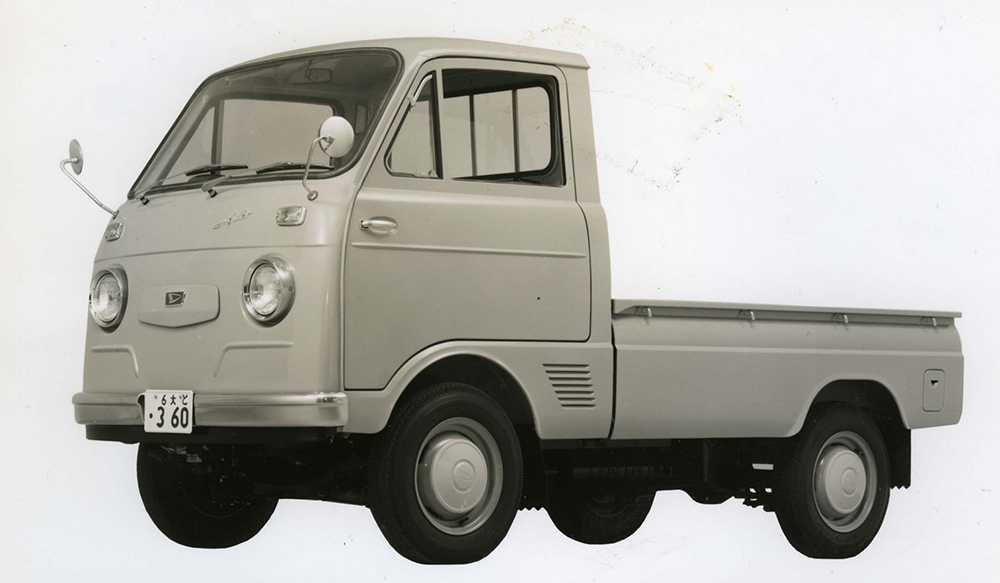 April 1964 (Truck)
As the Japanese economy thrived, so demand for the Hijet grew rapidly. In response to requests for a model that enabled full use of the deck, Daihatsu released the second-generation Hijet as a front-engine cabover truck. By positioning the engine beneath the front seats, the new model succeeded in maximizing both cabin and luggage space. In 1965, the company released a cab-over van model, which was the precursor to the Hijet Cargo.

September 1971 (Truck)
The fourth-generation Hijet boasted greater loading capacity, convenience, and comfort. In 1972, Daihatsu announced the Hijet Slide Van, the first-ever mini light van to be fitted with a sliding door, so further enhancing usability. Around this time, Daihatsu was actively involved in the development of electric vehicles; it developed a rapid-charge electric vehicle based on the fourth-generation Hijet Truck, and exhibited it at the 1976 Osaka International Trade Fair. 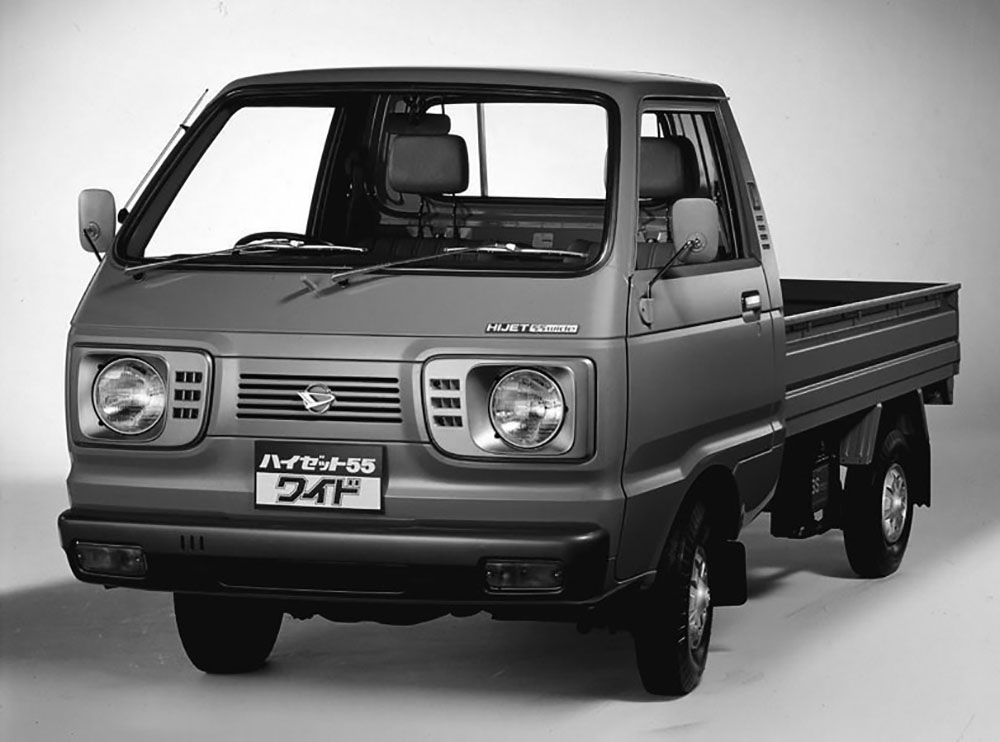 April 1977 (Truck)
Launched as the Hijet 55 Wide, the fifth-generation Hijet was designed to conform to new mini vehicle standards that permitted greater engine capacity, and total length, width, and height. The following month, Daihatsu also released a fully redesigned van model. The fifth-generation models were fitted with the company’s new AB 550cc engine, which had been developed to meet the stringent exhaust gas regulations implemented to combat pollution. 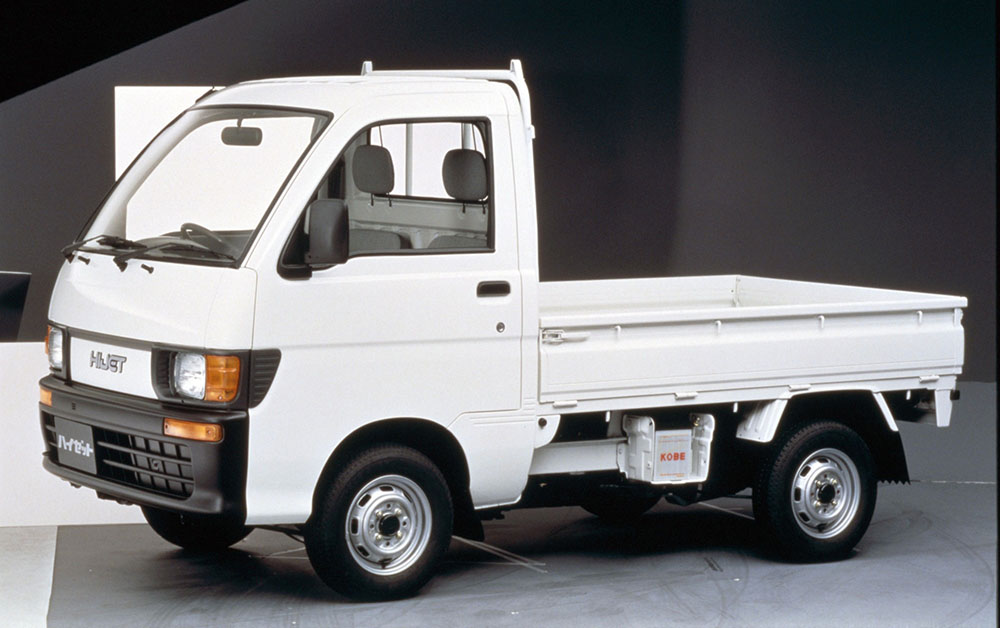 January 1994 (Truck and Van)
In 1994, the Hijet was fully redesigned in line with new mini vehicle standards that had come into effect three years earlier. Equipped with a new EF 660cc engine, the eight-generation models combined a comfortable ride with improved performance in all areas—including increased loading capacity and ease-of-use. Overseas production of the Hijet had begun in the 1980s, and models designed for local markets came to be produced in Indonesia, Malaysia, and other countries. 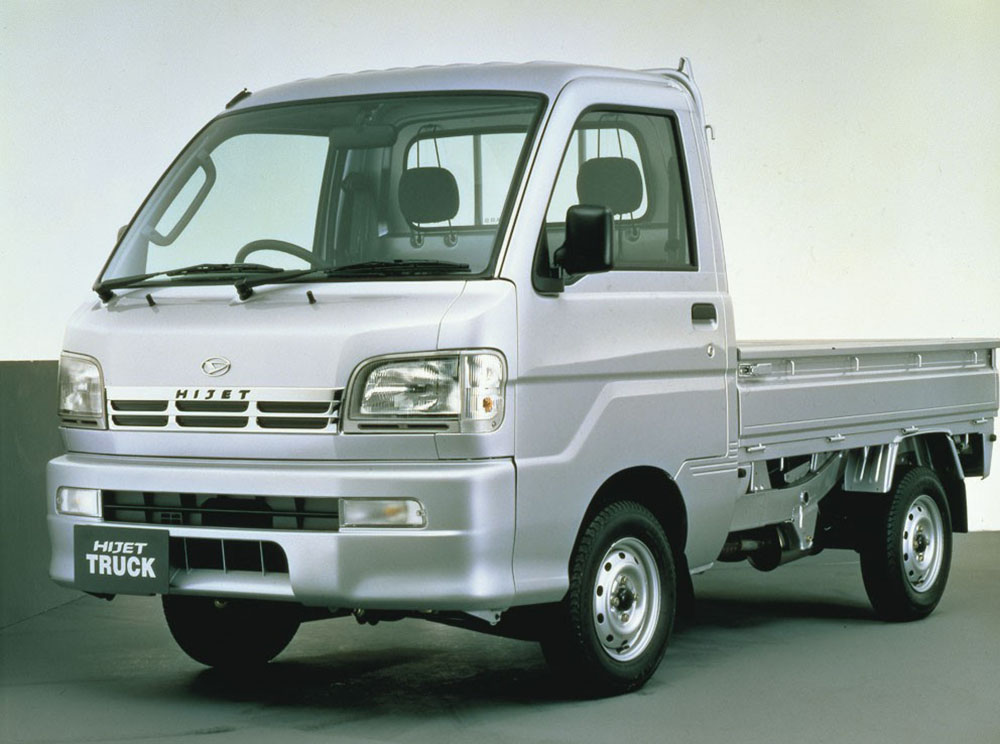 January 1999 (Truck and Van)
To conform with new 1998 mini vehicle standards that focused on improving safety, Daihatsu fully redesigned the ninth-generation Hijet; it lengthened and widened the body, and gave the model a new name: the Hijet Truck. While retaining the easy-to-maneuver cab-over design, the new model cleared the new Japanese collision safety standards and achieved class-leading safety. The ninth-generation was also fitted with a newly developed engine that delivered superior environmental and driving performance.

Daihatsu fully redesigned the van version of the Hijet as well, adopting a semi-cab-over layout for the first time for improved ease of driving and comfort, and naming it the Hijet Cargo. The Hijet Cargo was designed by the Italian designer Giorgetto Giugiaro and, like the Truck, had better safety and driving performance. 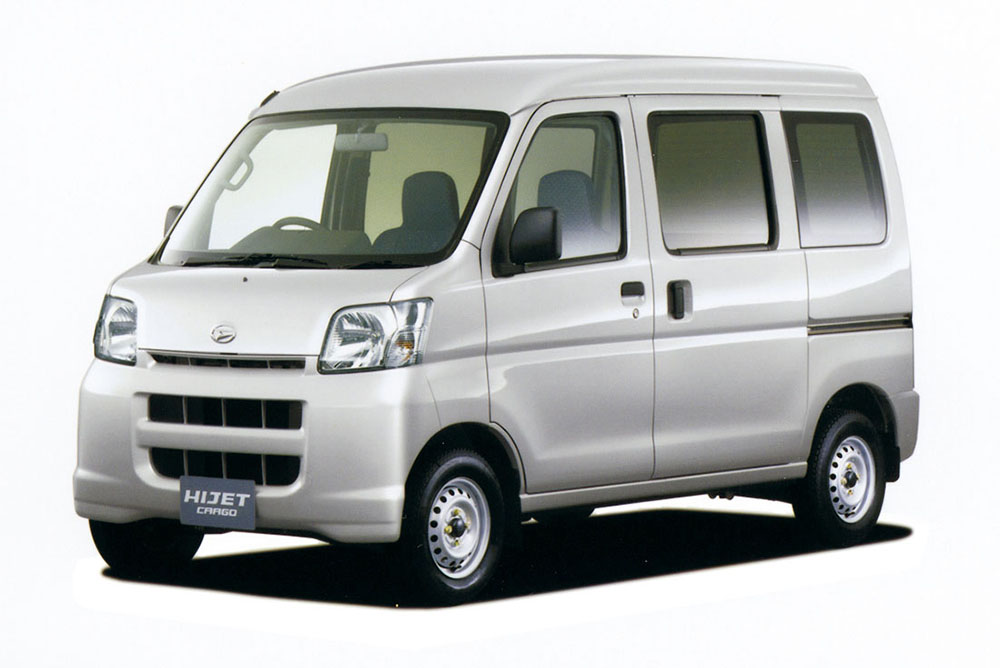 December 2004 (Van)
The Hijet Cargo was again fully redesigned for the tenth-generation release, and now used a different platform to the Truck. It was the first model to be produced at the new Daihatsu Auto Body (now Daihatsu Motor Kyushu) Nakatsu Plant in Oita Prefecture. In addition to updating the design, the new Hijet Cargo featured the longest wheelbase in its class, providing improved stability. The tenth-generation Hijet Cargo was partially upgraded in 2017, when it was equipped with the Smart Assist active safety system, and partially redesigned in 2018. 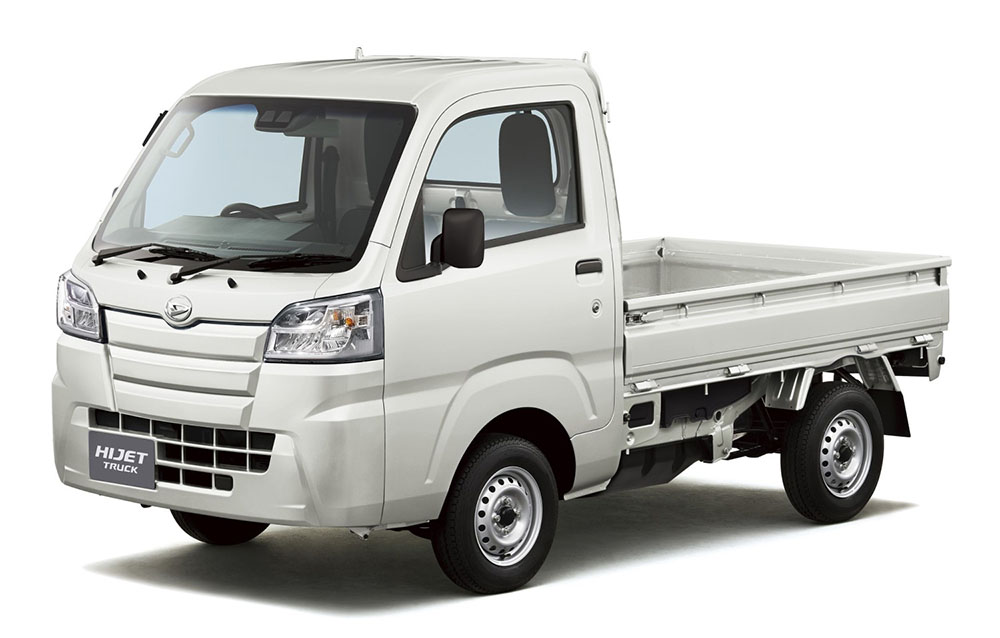 September 2014 (Truck)
In 2014, the Hijet Truck was fully redesigned for the first time in 15 years with the launch of the tenth-generation. All aspects of the vehicle were improved, including loadability, and ease-of-use. Recognizing that the number of female users had been increasing in recent years, Daihatsu also participated in the Women Farmers Project run by the Ministry of Agriculture, Forestry and Fisheries; to this end, it made an abundance of colors available, and fitted the Hijet Truck with numerous new features. In 2018, the tenth-generation Truck underwent a partial upgrade, and was equipped with the Smart Assist active safety system.

The Hijet 60th anniversary website（Japanese only）