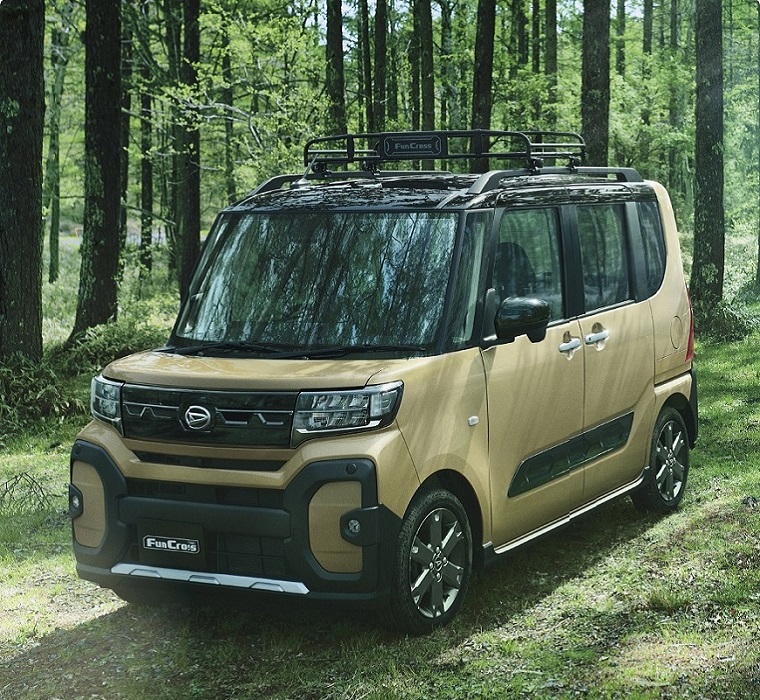 Daihatsu Motor Co., Ltd. (hereinafter “Daihatsu”) announced today that it has released information on its website and started to accept advanced orders for the new TANTO*2 as well as the new TANTO FUN CROSS*2 model that showcases its fun and activeness. Sales are scheduled to begin in the fall of 2022.
The TANTO was launched in 2003, establishing a new category of extra-space mini vehicles. It has since adopted the Miracle Open Door with built-in pillar, the first mini vehicle to do so*3, and double-sided Power Sliding Doors in subsequent models, becoming a core model for Daihatsu that has been well received by a wide range of customers. In 2019, it was launched as a high-quality vehicle at an affordable price that meets the needs of all customers as part one of the Daihatsu New Global Architecture (DNGA), the company’s next-generation approach to creating cars.
In the new TANTO, the Front Face of the TANTO CUSTOM has been significantly changed to express mature quality and refinement with a tremendous impact. In conjunction, the new TANTO FUN CROSS model will be added to the growing market of active extra-space mini vehicles as an active vehicle that goes beyond the everyday and allows people to spend time in a fun way.

Information about the new TANTO and TANTO FUN CROSS is available on the official website:

Based on its “Light you up” approach, Daihatsu will keep providing optimal mobility to every one of its customers, and catering to their needs via its extended range of mini vehicles and compact cars.

*1 The roof carrier in the image is a dealer option.

*2 Some specifications may differ at time of release

*3 Correct as of December 2007, when the second-generation Tanto launched; according to Daihatsu research