Daihatsu Motor Co., Ltd. (hereinafter “Daihatsu”) announced that its COPEN mini convertible sports vehicle celebrated its 20th anniversary in June 2022. The company wishes to express its gratitude to the customers and many people who have supported the COPEN over the past 20 years and pledges to continue making the COPEN as its flagship car to deliver the possibilities and driving pleasure of mini vehicles. As a part of these initiatives, the special edition vehicle*1 will be released in September.

The first-generation COPEN was developed as an authentic convertible sports vehicle that could be enjoyed by anyone with ease. It was highly rated for its high marketability, such as its unique exterior design and motorized convertible roof (active top), and new values such as “the joy of owning and operating,” and continues to be loved by a wide range of customers. The second generation, which was released in 2014, inherited the COPEN’s symbolic motorized convertible roof while utilizing a new D-Frame structure and Dress-Formation*2 changeable interior and exterior structure to realize impressive driving performance and enable owners to express their individuality. Four models have been released, including the Robe and XPLAY as well as the Cero and GR SPORT*3 which were released in 2015 and 2019 respectively.

To commemorate the COPEN’s 20th anniversary, the first TV commercial for the second-generation will start airing, and information on the history of the COPEN to date as well as the special edition vehicle*1 will be released on a special website. The COPEN 20th Anniversary Edition*1 will be a 1,000-unit limited production and advanced orders will be accepted nationwide starting on June 20, 2022. Based on the Cero, with round headlights reminiscent of the first-generation model, real leather seats were used for the first time in a second-generation model as a special feature to accentuate the high quality of each and every COPEN handcrafted by experts. In addition to the ivory interior color and coordinated seats, which look beautiful in nature, it will feature a 20th anniversary commemorative emblem and serial-numbered scuff plates to add a special touch.

Based on its “Light you up” approach, Daihatsu will continue to offer vehicles to each and every customer that are safe, secure, convenient, and comfortable, while valuing the fun and enjoyment of driving.

*1 Planned for release in September 2022. Some specifications may differ at time of release

*2 Option for the Robe and Cero 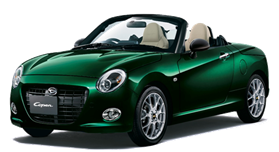 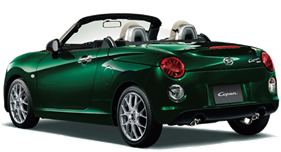 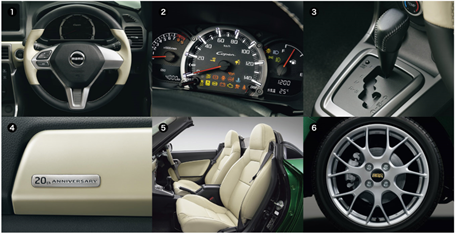 “I want to drive! I want to go forward!” A COPEN drives gallantly with its roof open through a world of beautiful scenery after the rain, in line with the sentiments we have in our hearts.
The slogan is “Drive. Fill this small car with a big adventure.”
The COPEN, which has thrilled all who have driven it, celebrated its 20th anniversary in June 2022.